A Benedictine Monk in Montana

Dormant grasses, stones and dirt, wind-formed evergreens,
Dense leafless lilacs laboring slowly to bloom forth
To scent the fresh, high-plains air with fragrant life;
Roads encircling and bisecting the steeply sloping land,
Amidst the varied gravestones marking a plot of earth
Surrounded by deep ravines and distant mountains,
All quiet beneath the unhurried Montana sky.

Again I return alone to tended and untended graves,
And to monuments for three who fell, two soldiers, one Marine--
Brothers John and Daniel Griffin, soldiers in the A.E.F.;
A hundred paces southeast, the solitary grave of John V. Flaherty--
All three having served in what they knew as “the Great War.”
They fought commanded by men, they fell commanded by Death:
No breath, no beating heart, a dead stillness at Calvary.

These three, like so many human beings, lived willing to die.
John Griffin, Army soldier stationed along the Rhine after the war--
After “the war to end all wars,”— shot dead by a German sniper.
Younger Daniel returned to Montana, married with children,
Worked as a fireman until a single slip on ice concussed his brain.
And John V Flaherty, born 1896, served in the 5th Marines,
Killed on 18 July 1918 in the Battle of Soissons, France.

All three gravestones front south, the brothers’ dark granites enfenced
Side by side, while Flaherty’s white stone stands boldly alone,
With two small flags respectfully enearthed beside the granite base.
You approach to read the inscription, a battle-scarred Old Glory
To your left, a faded red Marine Corps flag drooping on the right,
The light granite gravestone poised at attention on its foundation,
Glistening in the sunlight, silent yet solemnly whispering:

“Beneath your feet lie the earthly remains of John Vincent Flaherty,
5th Marines, who in ways unknown to him, gave his life for you
Standing and gazing at this memorial rock.  John was killed
Retaking Soissons from invaders on the first day of battle.
Born and raised in Great Falls, Montana, John left no progeny--
Nothing of his own remains on earth but these few disjointed bones.
Humbly bow your head and be grateful for his life, and for yours.”

As I listen and reflect, words from John’s friend with whom he enlisted
Begin to echo out from the forgotten past:  “You heard by now
That Jack was killed in battle.  He was wounded badly in the scalp,
And died on the way to the dressing station.
I surely miss the poor boy, but I guess it’s all for the best.
You must tell his folks that he did not suffer,
And I know he must of died a happy death.”

Shot in the head by a bullet, or struck by shrapnel,
If John was still conscious, he no doubt suffered severely.
I see blood, gushing blood, and I imagine his cries
As pain screams that Death is butchering his life.
Who knows if John’s death or anyone’s death was “all for the best?”
We do know that through the agonizing deaths of many
The invading armies were forced to surrender—for a time.

What could his friend mean in claiming that John died `a happy death’?’
His willingness to die was noble and brave, generous in its effects.
Whatever happiness he knew did not reside in his ravaged body,
But was grounded in his fixed resolve to sacrifice his life for others--
Tested and confirmed as he felt his bodily life bleeding out.
John's happiness, Everyman’s happiness, lies beyond one’s mortal body
In the Life that carries one alone across the undying stream of Death.

The piping song of a meadowlark gently penetrates my reverie.
From John’s grave I gaze back towards the Griffin brothers,
And walk past the lonesome spruce singing between these heroes’ graves--
A time-wounded tree of life bending over this wind-swept Calvary.
The rustling spruce speaks for every one who ever lived and died:
“Whether in life or in death, to be in God is my happiness.”
May these words be inscribed on the gravestone of my heart. 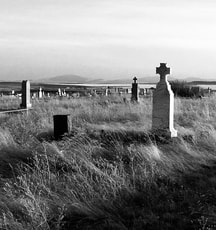 ​Silent and still they lie
these gravestones
unmovable and unmoving
in the winter wind.

Cold and lifeless to touch
solid with the hardness
of frozen earth, of death
lejana y sola.

They lie but do not lie
these gravestones
unyielding reminders
of what we clean forgot.

Shadows of shrubs
stripped bare
etched upon gray stone
and only the shadows dance.

Silently still speaking they lie
the gravestones
engraven in solitude
where they cannot die.